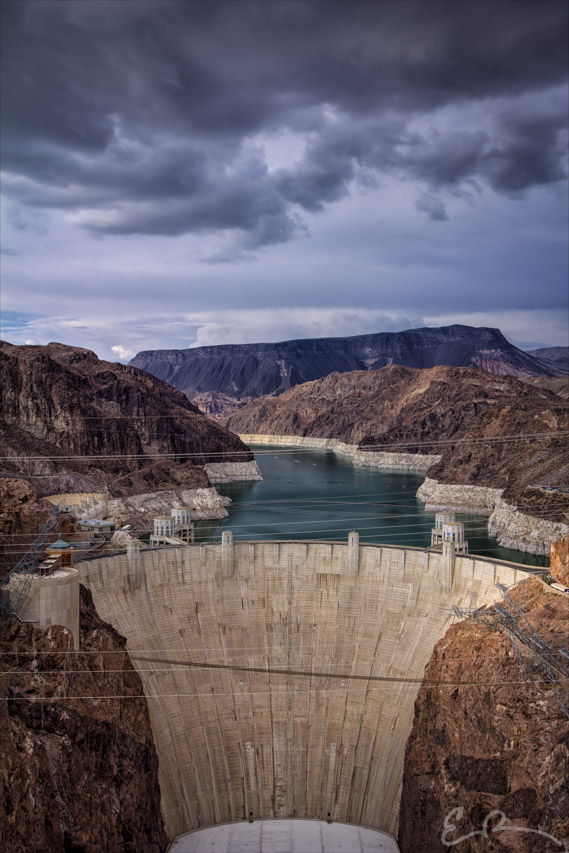 With rain in the area all day I’d hoped to catch the a shot with the face of the dam soaking wet and the reflection of some sunlight coming off it.  When I arrived the dam was bone dry despite obvious signs of rain having been in the area earlier.  Undaunted I setup to shoot and ended up with what I feel is a nice photo of the dam.

There are a couple problems trying to shoot the dam.  One is the power lines.  I suppose if I’d really wanted I could have gone through and painstakingly removed each one, but I’m not that patient and I feel the results wouldn’t warrant the work.  Two, the dam is in a high walled valley.  From the vantage point here you’re looking almost directly north-east.  The setting sun is going to be behind and to the left, but the canyon walls start blocking the warm sunlight well before sunset.  You do get some nice light, which you can see here where the view of the water ends, on the canyon walls further north.

This particular photo is a 5-stop HDR with the 0EV exposure being 1/80s at f/8.0.  I tried to really bring out the vivid colors that were going on as well as the red/blue contrast between the canyon walls and the storm clouds.  I also wanted to really bring out the detail in the face of the dam and the canyon walls.  Overall I’m really happy with the way it turned out.