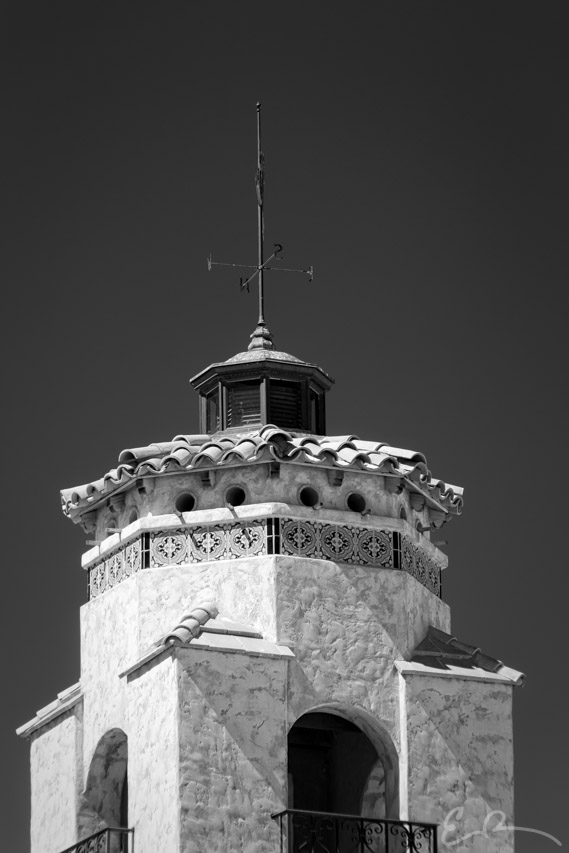 On a whim the wife, a friend, and I decided to hop in the car and take a “car hike” to Death Valley National Park in June.  Normally I wouldn’t imagine going at that time of year, but we had just had a “cold” front blow through and the temperatures would only be in the low 100s versus the typical 115+.

We came in from the south part of the valley along CA-178 and made stops at Badwater Basin, Artist’s Drive, and the Furnace Creek Visitor’s Center before taking the long drive up to Scotty’s Castle.  I’ve explored other parts of Death Valley in the past during hikes with my daughter, but this would be my first trip to Scotty’s Castle.

Once we arrived, we checked out the visitor’s center and purchased tickets for the next tour.  Having a few minutes before and after the tour I took the opportunity to grab some pictures.  The next few infrared photos I have will be from that trip.

This is one of two “spires” of Scotty’s Castle.  One thing that stood out in all the IR pictures I took was the texture in the adobe.  The texture is normally visible, but it really seemed to come out in the IR.