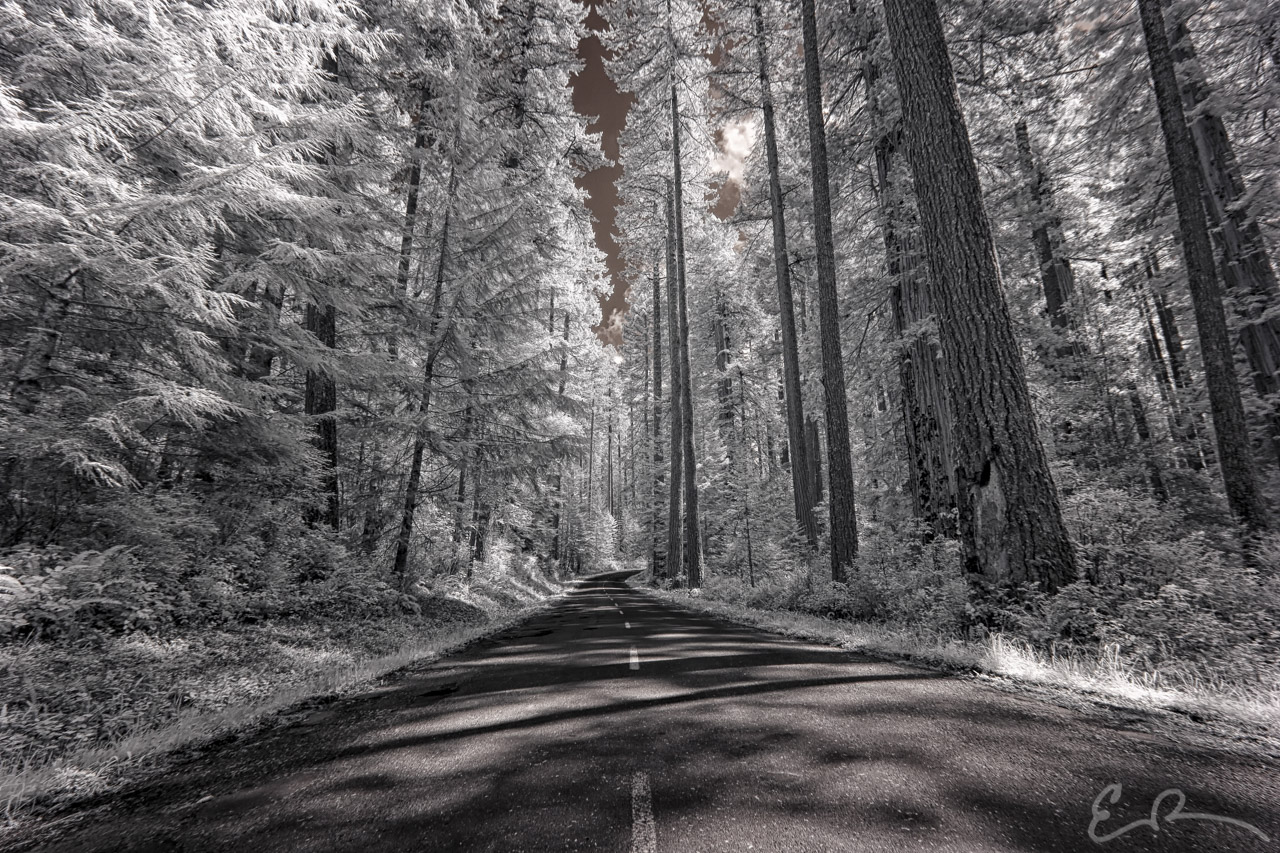 After driving to Kalamath Glenn, CA and the end of CA-169, my daughter and I turned around to return to US-101. By now we were starting to get hungry for lunch. Before starting off to our next destination we stopped at the Log Cabin Diner at the intersection of CA-169 and US-101 for a quick bite to eat. What we ate eludes me, but I do remember the place having a very local and down home feel to it. If/when I’m in the area again I won’t hesitate to stop by for a bite to eat.

With full bellies, we turned the car south onto US-101 setting our sights on Bald Hills Road.  Bald Hills Road is one of several Scenic Drives listed on the Redwood National and State Parks web-site as well as in their Park Map and Visitor’s Guide.

The drive is described as “Ascend a steep, 15 percent grade through old-growth redwoods (with trail access to the Lady Bird Johnson and Tall Trees groves) before passing through several open prairies resplendent with spring wildflowers, Roosevelt elk, and black bear.  Along the way, the Redwood Creek Overlook provides outstanding views of its namesake drainage as well as the Pacific Ocean in the distance.  Further on are trailheads leading to the picturesque and historic Dolason and Lyons ranch sites.  Near this southernmost part of Redwood National park is Schoolhouse Peak – the highest point in the parks at 3,097 feet.”

The entire drive is listed as being 17 miles in length measured from US-101 to the Lyons Ranch trailhead. Bald Hills Road serves as access to the Lady Bird Johnson and Tall Trees groves.

Named in Claudia “Lady Bird” Johnson’s (Lyndon B. Johnson’s wife) honor by President Nixon in 1969, Lady Bird Johnson grove is situated around the dedication site of Redwood National Park. Interestingly, President Johnson signed the bill designating the original park and he, his wife, then president Nixon, and future President, then governor, Reagan were present for the dedication ceremony making this location host to three of the men who have served as President of the United States.

Tall Trees Grove is best known as the location of the Libbey Tree, or Tall Tree, which was discovered to be the world’s tallest tree by a National Geographic survey team. Since the publishing of the name and location of the tree in July of 1964, the Libbey Tree held the title as World’s Tallest until 1989 when the uppermost 10 feet broke off during a storm. The tree was named after Howard A. Libbey who, at the time, was the President of Arcata Redwood Company which owned the grove that housed Tall Tree. On the day of the tree’s discovery Libbey was quoted as saying, “Someday I hope this grove can be opened to the public and preserved for future generations.” Thankfully it has.

The current holder of the title of World’s Tallest Tree, at just shy of 380 feet tall, is a tree named Hyperion. While Hyperion is located nearby, there is no trail available to directly access it making the Libbey Tree one of the tallest you can easily see. To give you a sense of scale Hyperion, at 380 feet tall, is taller than both the Statue of Liberty (305 feet) and Big Ben (316 feet).

Continuing along Bald Hills Road you gain elevation and start to leave the giant Redwoods behind for smaller Douglas-Fir and Grand Fir forests and open prairies. These open prairies were maintained by American Indians who would burn the prairies and nearby forests in order to keep the forest at bay. These fires would help promote the growth of spring grasses which would attract elk and deer to hunt while being used as material for baskets, nets, and string. Additionally, the fires would stimulate the grown of acorns, hazelnuts, berries, and other plants that were used as food sources.

Along the drive ever upward, if you make the time you can take a couple hikes across the open prairies and take a trip back in time. The first is called The Dolason Prairie Trail which takes you across open prairies, through forests, past the historic Dolason Barn, and ending at Redwood Creek. The second is The Lyons Ranch Trail which features wide open spaces before arriving at the Lyons Ranch Home. The views are amazing and on a clear day you can see all the way down the ocean. Unfortunately I didn’t have time to take any of these mini adventures. When I return they will most certainly be on the list.

The drive we made that day didn’t quite go the distance, but it was beautiful all the same.  When I started down Bald Hills Road the idea was to drive all the way over to Weitchpec.  Unfortunately in my haste to get on the road I failed to fill up the car in Crescent City.  This left me running uncomfortably low on fuel as we left the paved section of Bald Hills Drive.  Not entirely sure how much further Weitchpec was, the road conditions, and if services were available I chose to turn back towards camp.

The next time I’m in the area I intend on completing the drive over to Weitchpec. From there who knows where my whims will take me. Perhaps north along CA-96 to Happy Camp and then continue north on Grayback Road to meet US-199 for the return to Jedediah Smith Redwood State Park. Another option would be south along CA-96 to Willow Creek and then west along CA-299 to US-101 before turning north for a return to Jedediah Smith. Looking at a map of the area the possibilities are almost endless.

While I’m in the area I also plan on exploring more of the trails. I need, and want, to get out into these amazing landscapes. I’ve read many times that simply driving up, photographing, and leaving is not the way to truly experience a space. I certainly plan on continuing my exploration of the beautiful byways that make this country great. At the same time I need to remember in my search for byways there are also beautiful landscapes that are just a hike away.